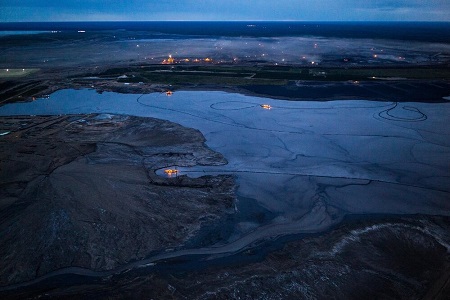 Canada’s MEG Energy Corp has asked Alberta Energy Regulator (AER) for a three-year delay for the approval process of a proposed oil sands project in the western province.

Last month the announcement for the cancellation of U.S. $15 billion (C$20b) Frontier oil sands project by private sector developer Teck Resources in Alberta took all the involved parties by surprise.

Around 20 other oil sands projects are being put on hold in Alberta as companies delay investment decisions hoping for new pipelines and higher prices. The projects could add about two million barrels per day to an already oversupplied market. Lack of pipeline infrastructure and low oil prices make these projects unfeasible for investors.

Oil sands, crude bitumen, or more technically bituminous sands, are a type of unconventional petroleum deposit. Alberta’s oil sands are the third-largest proven crude oil reserve in the world, next to Saudi Arabia and Venezuela, according to the Alberta province’s government website Alberta.ca.

Refining oil sands into petroleum and other energy products is an extremely expensive and carbon intensive proposition. Known for being the dirtiest fossil fuel, it is opposed by environmentalists, Nobel laureates and the First Nation (Canadian indigenous population) and the Canadian federal government’s approval is fraught with controversy because of the climate impact.

Teck’s decision came against a backdrop of protests across the country that have blockaded railway lines in support of indigenous opposition to construction of a gas pipeline in the country’s west, the latest chapter in a long-running culture war over Canadian oil and gas development.

The blockades, some of which had exceeded six days had the potential to shut down “significant parts of its Canadian National (CN) railway network imminently,” the railway said in February. As a result CN obtained court injunction orders for two blocked locations, and the railway is working with local enforcement agencies to keep the network open.

That is why pundits believe that the decision to shelve these projects has helped Prime Minister Justin Trudeau dodge a political problem as the federal government was due to rule on Teck’s application in coming days. The developer abandoned a nine-year effort to extend mining, sparing Trudeau a choice between energy interests and environmental concerns.

The Frontier Project was set to produce 260,000 bpd and supported 7,000 jobs – but would also have emitted up to four million tons a year of greenhouse gases. More than the entire country of Iceland emits a year.

Alberta’s Conservative Premier Jason Kenney blames “urban-green-left zealots” and says it will “further weaken national unity.” In the past Alberta has threatened to walk out of the Canadian Confederation, as has been the case with Quebec and other Canadian provinces in the past.

Due to the high cost of extraction in the oil sands industry Teck needed $95 a barrel to break even and Canadian oil is selling for $38. Low oil price is due to recent coronavirus outbreak and the excess supply of crude. So the question is who was going to lend Teck $15 billion, when the people who fund these projects are pulling out of the market?

Investors are taking climate crisis seriously and ensure they’re considering the risks from emissions and higher temperatures. The World Bank in 2017 pledged to “no longer finance upstream oil and gas” after 2019. However, recently the Washington-based institution has announced it will provide $55 million to aid for fossil fuel extraction in Guyana, with $20 million to pay for training and $35 million to revamp the banking and insurance sectors in the country.

Guyana, a tiny South American country of only 800,000 people and less than $5,000 GDP per person in 2018, is expected to become one of the world’s largest oil producers after U.S. firm ExxonMobil, along with the consortium partners Hess and China’s state-owned CNOOC, found sites that could deliver eight billion barrels of oil.

Guyana in late February sent its first shipment of one million barrels to markets in Asia and the U.S. as part of a production-sharing agreement.
Voters in Guyana will head to the polls on Monday in a crucial election that will decide which party oversees an oil boom that is expected to transform the economy. Guyana could become one of the world’s richest countries per capita – or another country marked with the resource curse, analysts say.

A growing number of global insurance firms are divesting from fossil fuels. French insurer Axa, the third-largest globally, said last year that it will be divesting $700 million worth of interests in Canadian oil sands production and pipelines. The insurer said the oil sands are a very carbon-intensive industry “and a serious cause environmental pollution,” and it would no longer invest in it.

Another example Zurich, the world’s seventh biggest insurer, has shifted away from coal.

Insurance companies are increasingly affected by the consequences of climate change and selling holdings in oil sands companies and refusing to underwrite their operations.

The topic of insurance is prominent on the agenda of UN climate talks, where the focus is the lack of coverage for small islands and other nations most affected by rising sea levels and worsening droughts.